Picking Up Your Feet. 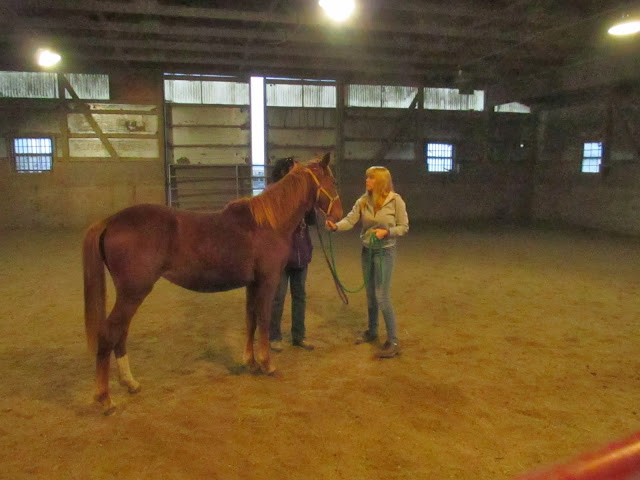 I'd like to apologize for the exceptionally grainy images for this post. I had decided to bring my new camera to the farm to document May and I, and the settings were never adjusted to the arena's light, or to May's movement. I'm working on getting a photographer to come out and take images specifically for the blog, but these will have to work for now. 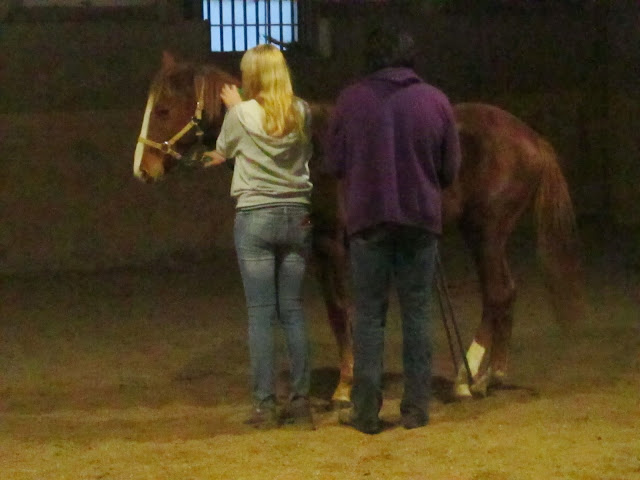 Anyway, onto the training session! Mandy was kind enough to pull May from the pasture and place her in a stall until I could get out of work. Once I was there, I guided May around the arena for a few minutes, walking a relaxed path and exercising some basic commands until we came to a complete stop. I was touching her all over, running my hands over her feet and lifting them a little (which I've done every time I'm around her) when she decided to bite the top of my head. Mandy took that as a good indicator that we should start working on getting May comfortable with letting someone lift up her feet.
Now, it is incredibly important that horses learn not only this but to also learn to be comfortable standing on 3 legs at a time. Farriers need to tend to horses hooves, vets need to be able to work on an injury, and an owner needs to be able to pick up the foot of a calm horse to see if there's a need for a vet or farrier in the first place. May hasn't had much success with the farrier in the past, so it was time to finally nip this uneasiness in the bud. 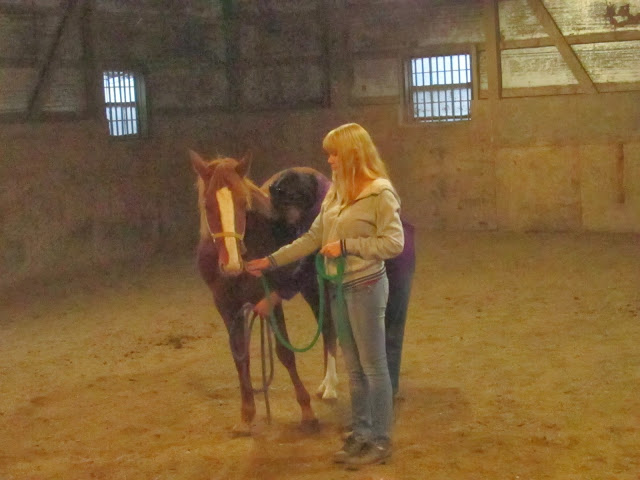 We chose to use a lead rope to pick up her feet so that it was less dangerous to us, and began just by gently rubbing the rope against her legs. Once she was relaxed and accepting of the rope, Mandy then put it around the back of each leg, one at a time, until she was comfortable with that, too. She was less than happy to comply with this, and she paced in circles while we made ourselves pivots and slowed her down with "woah" commands.
﻿ 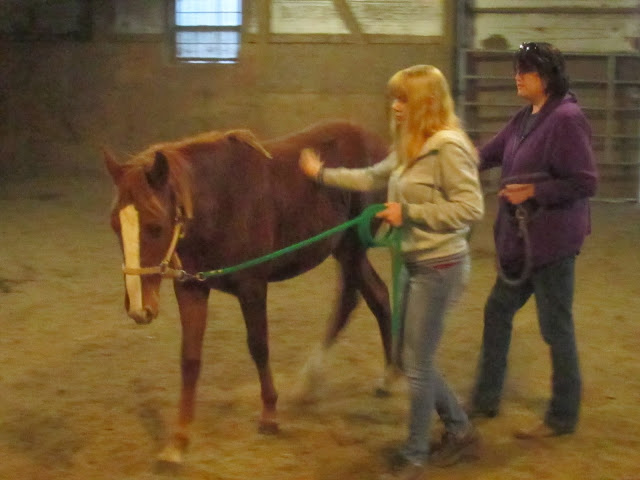 It's at this point that I feel like it should be said that I am still terrified of May. My trust in her has grown exponentially, but I still question everything that I do and everything that she could do, and that uneasiness spurs a lot of hiccups in her attitude to happen. Every time I'm with her, I see how much improvement she's made with being handled, and being well mannered, and it makes me feel instantly better. Still, I dwell on previous experiences and I put expectations out there when we're together that something bad is going to happen. Those things make her great improvements seem like tiny little spurts of luck to me, instead of the moved mountains and huge victories that they actually are.

This fear is really prohibiting me from becoming a strong leader and companion to May, and I realize that every time that we're together. Since Mandy and I have talked at length about this (and she knows the signs of me panicking), she will often switch from teaching May something, to teaching me instead. 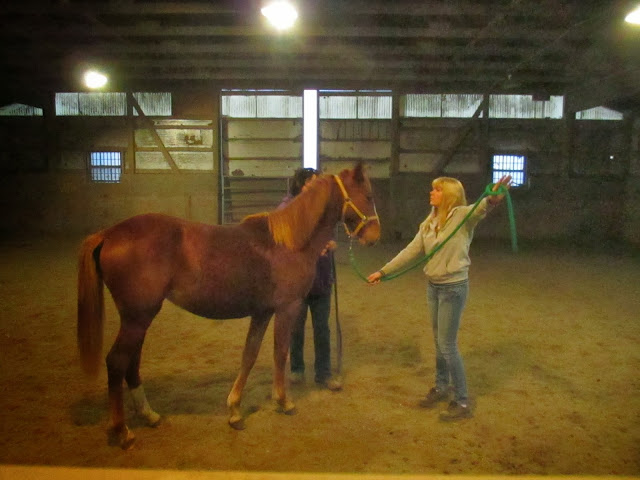 Now, I have a fear of standing in front of May to get her to stop when she won't stop otherwise. It's not that she's ever hurt me when we've worked together, or that she's temperamental when I'm standing there, but I still get excessively nervous. Often when I throw my hands out and shout a booming 'WOAH', I'm shaking. Being that this is something that I need to work through, Mandy makes it a point to consistently teach me how to confidently stop any horse that might be moving towards me. It always takes a few dozen tries to get over my nerves, but I eventually get there. By mid-session I was throwing my hands out to stop her, and my hands were as still as ever. 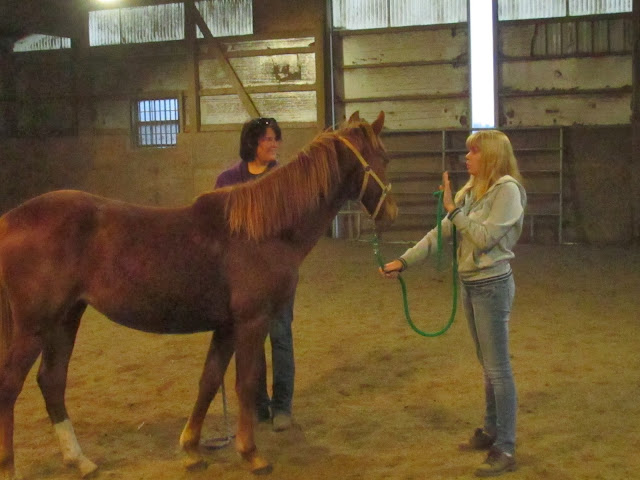 The other form of stopping May is using the 'traffic sign'. This makes me equally as nervous, but again, by the time we had reached mid-session I was doing it and May was listening. 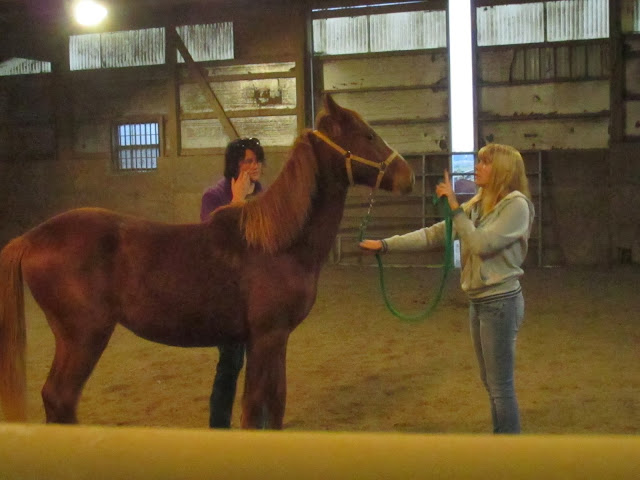 Now, I'm going to make another post about this that goes more into detail, but I have learned to back May up with just my finger. Mandy reminded me to use this in addition to the other methods if May is trying to walk into me. Every time she listens to this command and backs up, I nearly fall over in pride and excitement. I cannot believe, even for a second, that we mastered this trick.

Anyway, after about 30 minutes of getting May used to the lead rope on her legs, Mandy and I were finally able to lift up each of her legs, one by one. She fought it a little, as any horse would at first, and then she slowly started to get used to one of her legs being off of the ground. She did so well that we didn't push her to do anything else, and just enjoyed the moment of victory. 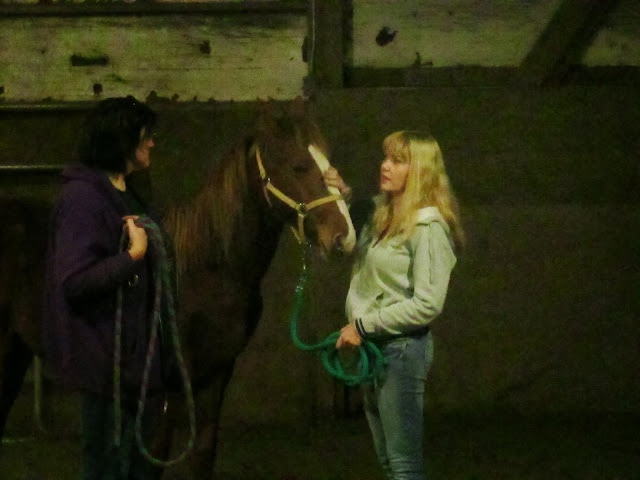 After our training session, we walked May into an open stall and Dan and I spent a chunk of time grooming her. I was so grateful to have him at the farm to witness a training session in person, and to allow him some time to get to know May a bit more. He hadn't been to the farm since I first adopted her, and seeing them together made me extremely happy. 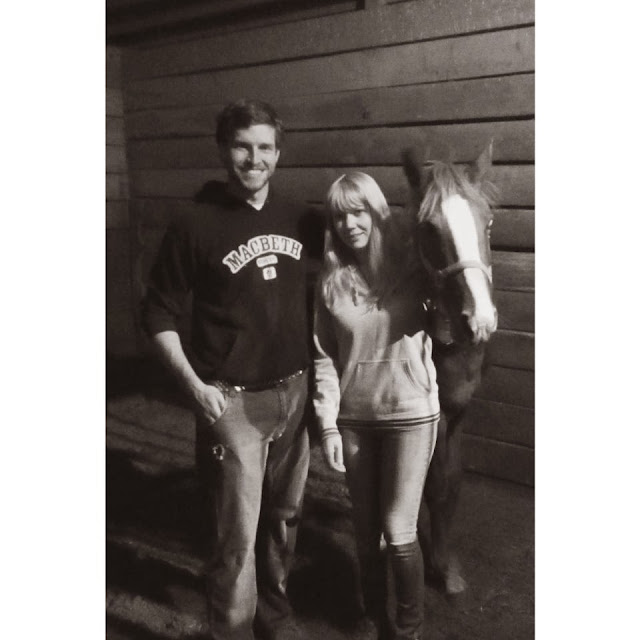