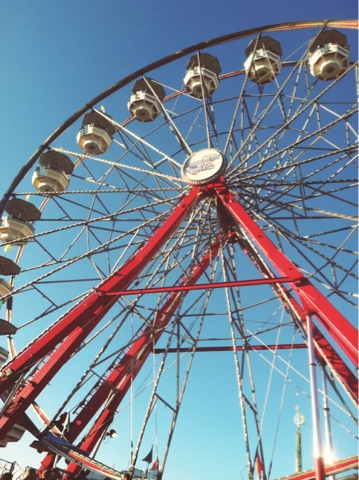 We visited the Ohio State Fair on opening night this year, and we had such a blast. Normally I'm not all about being around so many people, but the weather was just incredible and Dan and I were a little too wrapped up in each other to really notice anyone else (except for the people who naturally walk like zombies whenever they're outside). We were so busy last year that we didn't make it to the fair until the last day that it was open, and we enjoyed the total solitude and emptiness of the fairgrounds. While that was an entirely different experience, I don't think either of us really had a preference between our visits.

This year the attractions were infinitely better than any other year that I've been, as there were camel rides, and extremely entertaining sea lion shows that left me beaming like an idiot. We got to take our picture with two 8 year old sea lions that plopped their awesome heads and fins on our shoulders to pose, and as soon as they touched me, my face contorted into this weird smile thing that was so impossibly creepy. I kind of look drunk on happy in the image. It's one that is getting buried in my scrapbook, and never shown to another human being ever =D 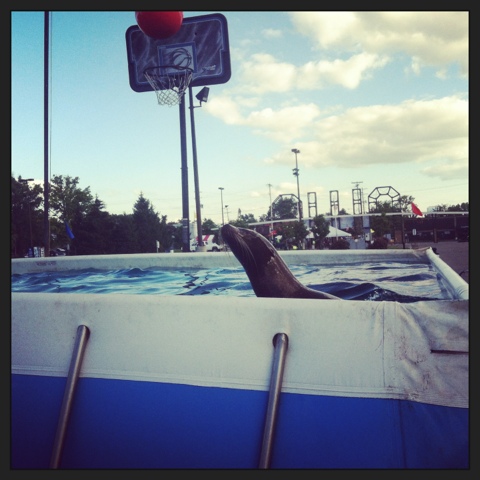 At any rate, we both agreed that the sea lions were our favorite part of the fair. There were four total, and their routines were hilarious, sweet, and impressive. I wish we had gotten slightly better seats, but it was still an overall awesome experience. Before the show, I hung out by their swim tank and giggled manically as they bobbed in and out of the water, talking to me. I've never been so close to a sea lion before, and I've never really watched what they can do. It was awesome. 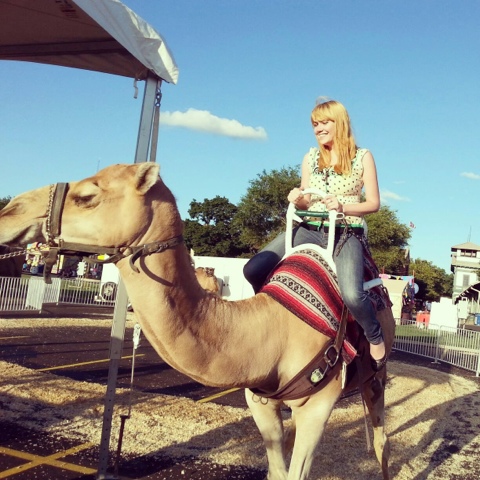 Immediately after we were done having the sea lions win us over, we headed over for a camel ride. I'm a huge, huge, huge animal lover, and I pretty much want to touch every animal on the planet, so the camels were a large pull for me. In fact, I talked about the camels so much during the week leading up to the fair that all of my friends were finally just like, "You got your camel ride! Talk about something else now!" Naturally that just meant that I'd spend every opportunity talking about the sea lions instead ;]

Anyway! I've ridden an elephant before, and that was one of the coolest things I think I've ever done in my entire life. Elephants are my favorite animals, and even though I was a kid when I rode her, I still remember it fondly. Camels are an equine that I've wanted to ride for years, and I just never had the chance to. It was a rather strange experience, as their bodies move in a way that I can't explain and definitely did not anticipate. I managed to make a passable face while I was riding her/him, thankfully, so I have photographic proof of at least one animal adventure. 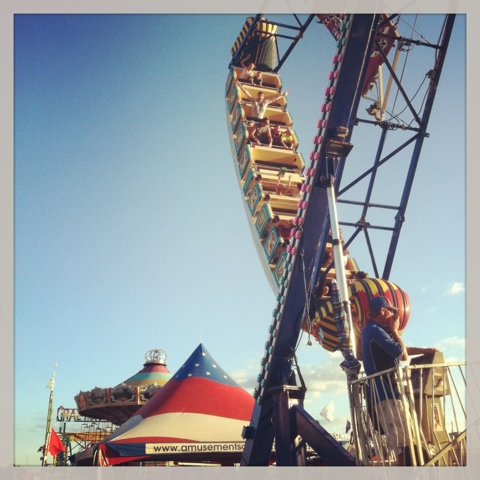 After dinner, and the animals, and the photobooths (it's a tradition now to use every photobooth that we encounter anywhere), it was time for Dan to ride rides. I've always been a humongous chicken, and I haven't ridden any amusement park rides since I was a kid. I get that no one really understands it, but I have so much fun watching others ride coasters and crazy swing things. The faces people make are priceless, I feel all of the anticipation of the ride, I get to hold on to belongings, and I get to not be scared to death. It's a win, win for everyone! Dan hammed it up on the Pharaoh, and I loved every second of it. 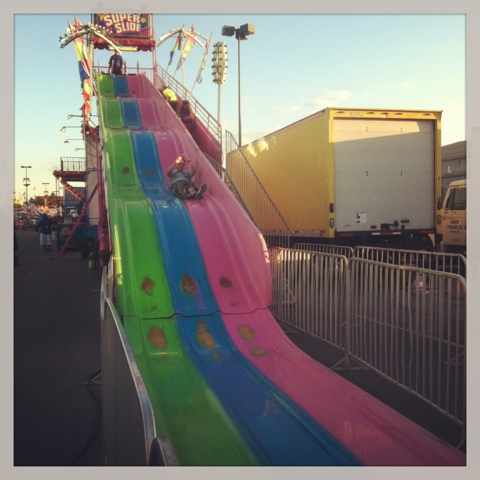 After the rides we visited the petting zoo, where I promptly made a scene with my high pitched squealing and animal baby talk. I petted miniature cows (which might be the cutest thing ever), goats, lambs, oxen, bunnies, and sheep, and fought the urge to pet the animals that I wasn't supposed to pet. It was so excessively hard for me to keep my hands away from cages and enclosures, you have no idea.

Eventually we made our way to the horse competitions, and Dan amazed me by getting into the show. Granted, we were acting like a pair of Mean Girls, but there was a good amount of horse admiration going on. I know that Dan respects the fact that I have May, but he's not really animal crazy. The fact that he sat for an extended period of time and listened to my limited knowledge of horses, and commented on their stature, and training, and anything else horse related really made me happy.

At the end of the show we headed back out to the food lane for dinner, and watched the fireworks above us. It was weirdly romantic. We've spent so much time around fireworks over the last month, and each time has been great, but this time it was just surreal. We were surrounded by carnival lights and music, where we had space away from people, and the fireworks captivated everything. Everyone around us stopped to admire the show, and I think the comparison of that to when they were bustling around like madmen was just beautiful to me.

Anyway, this was the best year at the fair yet. It was so good that we've talked about going back for seconds (if not to get a better, less derp-faced image with the sea lions :). All of our time together, by the way, just keeps getting better and better. I'm always amazed at how everything we do seems to be the greatest thing in existence, even if we've done it a hundred times before. I'm very happy that life led me here, to this place, with these people and these adventures, as I am having the best time of my life. 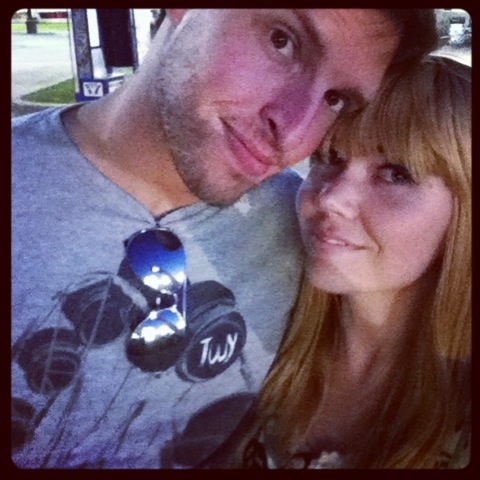 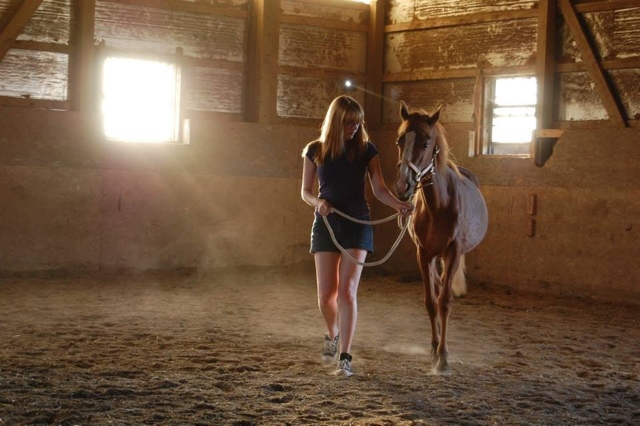 May officially turned a year old in June, and since then she's hit a bit of a growth spurt. Actually, every day for her is a day where she seems to have grown bigger, and bigger, and even taller, too. Along with this height has come a very comical adolescent attitude, making our time together both hilarious and incredibly frustrating. While I'm still overcoming my issues in leadership, she's overcoming her kicked in instincts as a mare. Her personality is practically bursting at the seams, and even when I've about had it with her stubbornness, she always manages to crack me up. 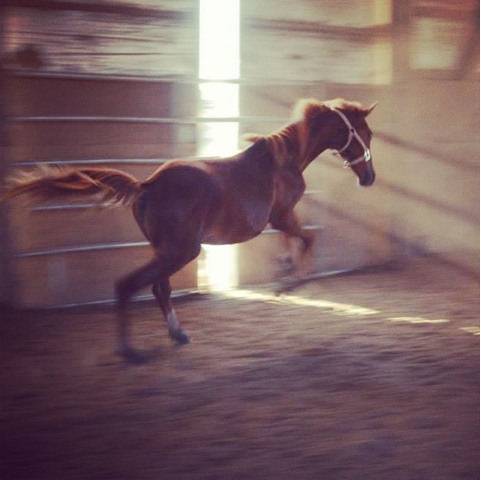 Anyway, I'll be writing more about our new dynamic, and all of the victories and challenges it's brought to the table a little later. For now I just thought that I'd share some images that were taken by a friend a few months ago while I was working with May. Amanda managed to capture her goofy spirit and our growing bond, as well as an action shot that left me beaming. 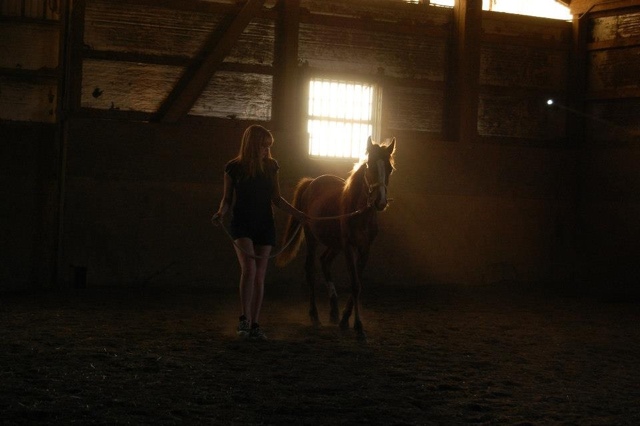 Note: During this particular session, May and I were syncing our foot steps so that we were walking at the same pace, matching our feet to the other. After a few dozen laps, she started to slow when I slowed, speed up whenever I quickened our pace, and she stopped whenever I did. The coolest part of this was when she started to match her breathing to mine, and would sigh when I sighed, yawn when I yawned, and relaxed when I relaxed. That took much longer to get to, but when it finally happened I was ecstatic. Ecstatic and amazed, and bewildered, and humbled, and extremely happy. 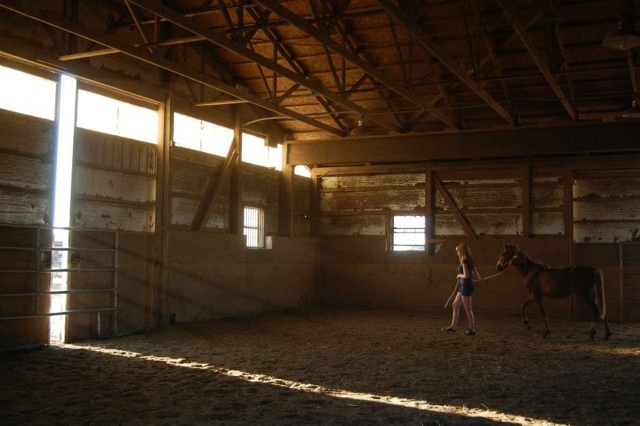 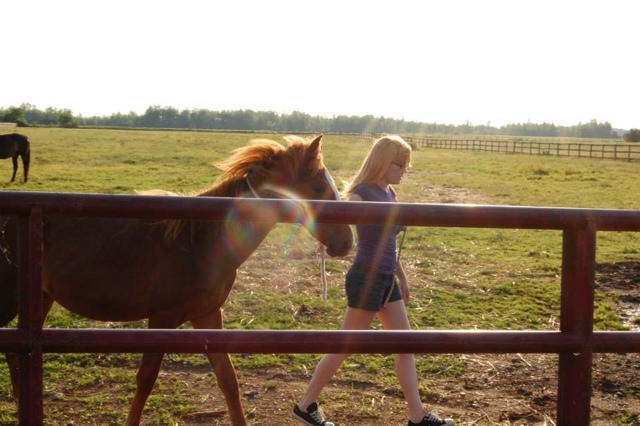 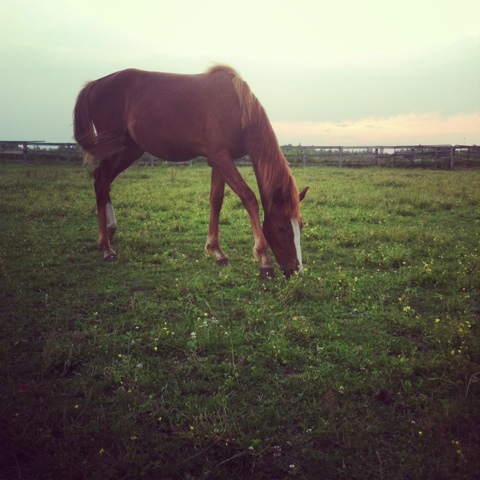 And finally, a happy horse after a happy training session. I hope that you enjoyed Amanda's pictures. I'll be writing an actual update about May and I in a few days that sort of goes over all of our progress for the last few weeks. Until then, have a great week!

Posted by Positively Bri at 10:33 AM No comments: 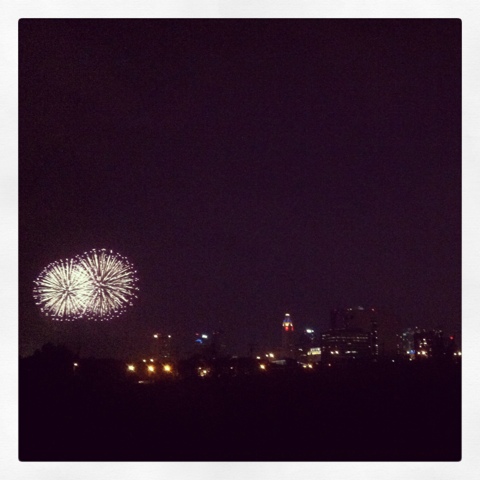 Happy belated birthday, America! Our celebration of you started out with a deliriously sweet trip to the
Scioto Audubon, where we found a hillside full of flowers, away from people, and set up to watch the downtown fireworks in Columbus. We spent our waiting hours playing charades, making silly accents, making hair bobbles out of grass and flowers, and giggling like mad men. 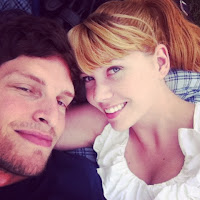 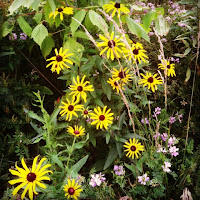 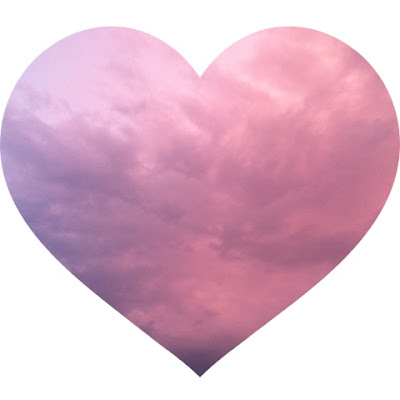 Just before the sun went down, the sky lit up in pinks and purples, and everything was put under the most beautiful golden light. I'd never in my life seen anything like it. As I went to go take a hundred pictures of the sunset before it was over, I'd realized that my iPhone just didn't do it justice (naturally. I'm not sure I'll ever learn). This image doesn't really capture how brilliant it was, but it gives you some sort of idea. It was so romantic!

Anyway, the following night we headed out to the Clintonville fireworks show at the Park of Roses (an event I haven't missed since moving here), and watched the show with our friends from New York. We ate funnel cake, danced in the rain, talked about American history, and enjoyed each other's company. It was a great end to a two day celebration!

I hope that you all had a wonderful and relaxing Independents Day, and that you got to eat as many deep fried goodies you could get your hands on. 'Merica!
Posted by Positively Bri at 7:38 AM No comments: 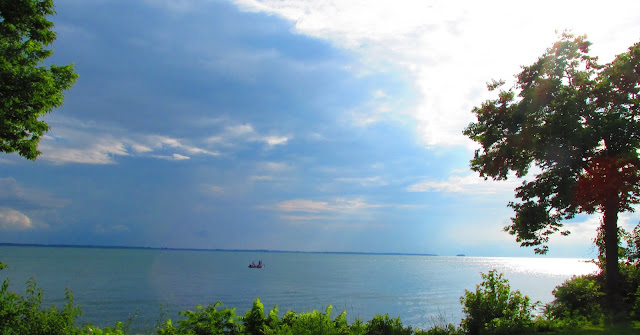 I can't believe that it's already July, and that it's been over a month since my last update. In the time between then and now life has gone from bad, to good, to great- and it's just kept going. Every day has felt like a gift, and the people that I've been able to share those days with have made me feel more loved and excited about life than I've ever felt before.

I'll take some time in the next week to recap some of the things that have been going on since I last posted, but for now I wanted to share some of the images from our first camping trip of the year. Initially we were supposed to go during the first week of June, but an unexpected surgery left us pushing the dates to the end of the month instead. What started out as a 12 person expedition shifted to a couple's retreat with two of our very best (and very engaged) friends, who also happen to be my favorite adventure partners on the planet. 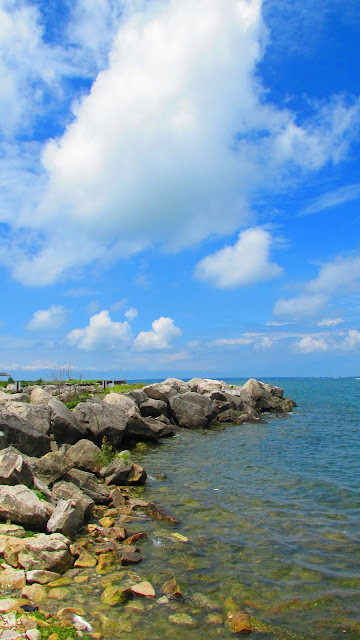 We had decided to go out to Kelley's Island and camp for the weekend. We hopped onto a privately owned boat and charted across Lake Eerie at nine in the morning with one too many bags in tow. Once we got there we spent nearly every second exploring, sight-seeing, and going on mini double dates. I'll leave you with my favorite images of the island, all of which seem to scream summer. Enjoy! 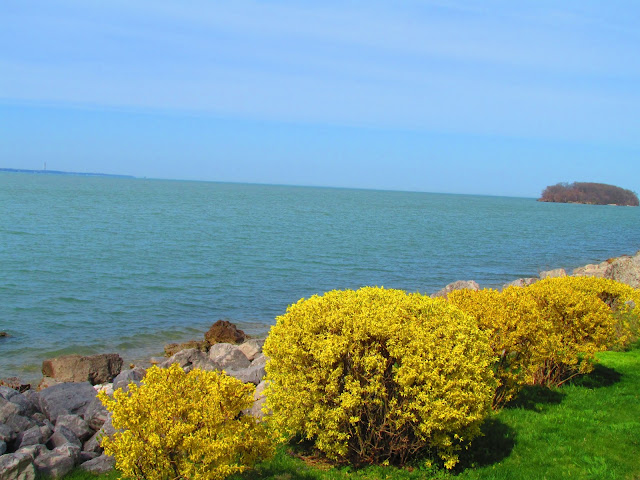 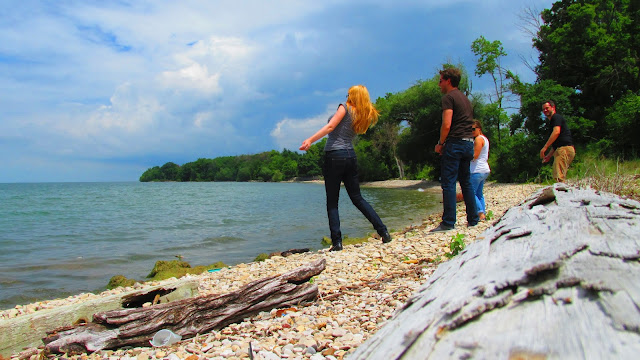 Skipping rocks has become one of Dan and I's favorite things to do together. Being able to skip perfect rocks with our best friends was just the best thing ever. 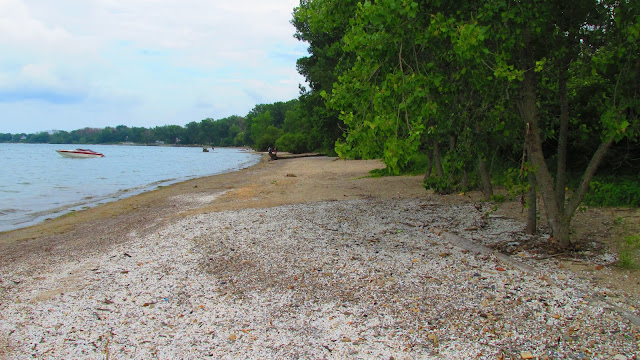 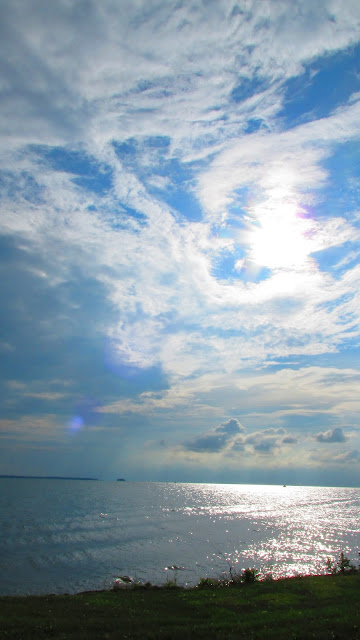 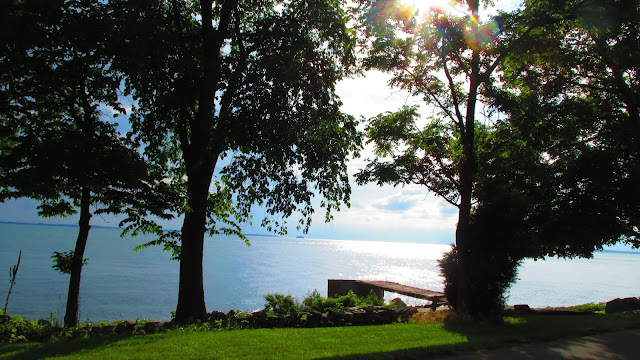 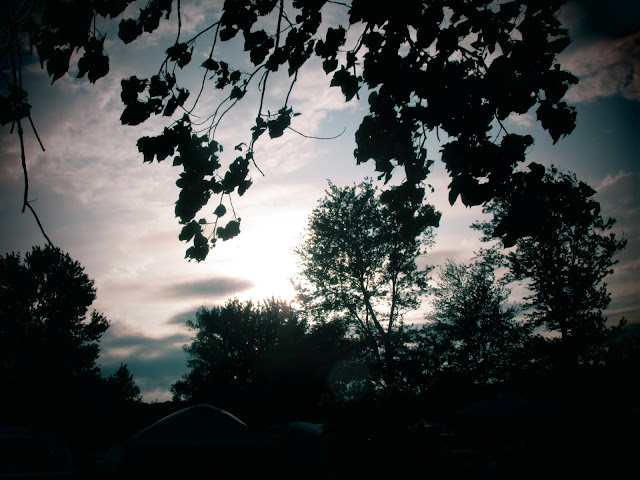 We had such a blast throughout our entire stay. Between the delicious food, our courteous camp neighbors, the extreme bonding and cathartic company, and the glorious scenery, it definitely made itself into one of my favorite trips ever. I can't wait to go back.
Posted by Positively Bri at 7:56 PM No comments: